Please keep these annotations SPOILER-FREE by not revealing information from later pages in the novel.

go-devil squibs . . . oil-well torpedos
Explosive charges set off inside a well in order to clear plugging of the formation that interferes with oil flow.

all ready to explode
The 1908 Mexican revolution.

¡Seguro, ése!
Spanish: for sure!

heliograph
Communication device that reflects sunlight to form a beam, then interrupts the beam to generate a binary signal in Morse or other code.

gregaou
The north-east or Gregaou (Greek) wind of Nice, which is happily rare, since it brings storms of hail and even snow in winter.
Other winds of Nice: the most frequent is the east wind, which is especially formidable during autumn. The south-west wind (called Libeccio, or wind of Lybia) is moist and warm. The mistral (from the north-west) and the tramontane (from the north) are generally stopped by the mountains; but when they do reach the city they raise intolerable dust-storms.

Zeugnisbüchlein
German: student's pocket report book. Such a book serves as a transcript for university students.

the film shot here not long ago
This is an actual film. "Panorama du Grand Canal pris d'un bateau" is available on the DVD The Lumiere Bros. First Films distributed by Kino Video. The director was Alexandre Promio, and not Albert Promio as is in the text.

the image had entered the Arsenale 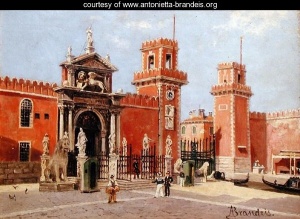 Figures Before the Arsenal (Antonietta Brandeis,1849-1920)

???
The Arsenale is a shipyard and naval depot in Venice. It occupies a big area of the Castello district and is one of the most important areas of Venice. From the Arsenale sailed the great Venetian merchant and military fleets that made Venice one of the first great maritime powers. With the San Marco (political and relgious heart) and the Rialto (commercial heart), the Arsenale (military heart) completes the triad of power centers in the Venetian Republic. Its contruction begun in 1104 and was continually extended from the 14th to the 16th century. It is surrounded by high walls with square towers bearing the insignia of the winged lion.

rope-walks
Making rope calls for a room or yard somewhat longer than the end product, called a rope-walk. 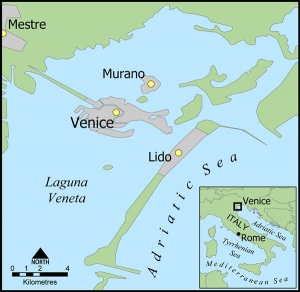 Lido and the Venetian Lagoon

Venice's Lido, home to the Venice Film Festival every September, is an 11-mile long narrow sandbar separating the Adriatic Sea from the Lagoon. One of the hotels in Lido was the setting for Thomas Mann's Death in Venice. The Grand Hotel Excelsior is on the Adriatic side of the island. From the lagoon side to Venice is about 4 miles distant. The name Lido also refers just to the resort on the Lido island

The firearms are still in use and the ammunition for them is still produced; see annotations to p. 737.

association football
Called soccer in the U.S. and football everywhere else.

Il Squalaccio
"squalo" is Italian for "shark." Appropriate to a submarine's name, a squalaccio would be an evil shark — and may refer to the Italian torpedo — even if the article used is wrong (should be Lo Squalaccio, but Pynchon sometimes has problems with Italian articles, also considering that I Zingari should be Gli Zingari). "Squalaccio" also name-connects with the Argentine exile in Gravity's Rainbow, Squalidocci, which would translate to ....?

Malamocco
Another resort about 3 miles south of Lido resort on the same (Lido) island.

terraferma
Italian: solid ground. The parts of Venice (Mestre, etc.) not built in the Lagoon.

squero
A squero is a workshop for building gondolas.
...a Venetian boat-builder

mavrovlaco
Italian: Mauro-Vlach or Morlach. An inhabitant of the western coastal part of the Balkan Peninsula.

Marcel wave
n 1872, Marcel had introduced his famous Marcel wave using a heated iron that imitated the natural curl of the hair. Hot tongs were applied to produce a curl rather than a crimp. Done at intervals over the head, the hair would assume the look of moiré. It revolutionized the art of hairdressing all over the world. The Marcel wave remained popular for almost half a century and helped usher in a new era of women's waved and curled hairpieces, which were mixed with the natural hair.

Cadorina
A female person from Cadore, a mountain community in the Italian region of Veneto, in the northernmost part of the province of Belluno, bordering on Austria. Northern Italians are typically fair of hair. Titian, the painter, was born in Cadore.

the cemetery island of San Michele
The Isola di San Michele, a former prison island just north of Venice itself less than five minutes away by waterbus, is Venice's cemetery since early 1800s. Bodies were carried to the island on special funeral gondolas, including Igor Stravinsky, Joseph Brodsky, Sergei Diaghilev and Ezra Pound.

Cimiez
Cimiez is a upper class suburb of Nice, France.

Dalmatian
From Dalmatia, coastal and island part of Croatia.

Law of Deterministic Insufficiency
Perhaps referring to C.S. Pierce's notion of Chance existing as an irreducible element in the universe?. See Chums of.

Earl's Court Wheel
The Great Wheel of Earl's Court was based upon the celebrated Ferris Wheel that had been the most arresting feature of the Chicago Exhibition of 1893. Building commenced in 1894 and it was opened to the public in July 1895. By 1906, the Wheel has ceased to be profitable and was demolished. Read more...

obvious from the foregoing
Mathematicians' code: The baffling development I just finished leads (with some hand-waving) to the following unsupported conclusion.