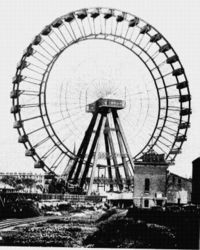 Great Wheel at Earl's Court
The Great Wheel of Earl's Court was based upon the celebrated Ferris Wheel that had been the most arresting feature of the Chicago Exhibition of 1893. The patentee of the Chicago Wheel, a United States naval engineer called James Weir Graydon, had signed over his European rights to Walter B. Basset, a retired British naval officer. Basset was therefore the contractor for the project, but not apparently being himself an engineer he was assisted by others in its preparation and execution, notably the engineers J. J. Webster and C. F. Hitchens and the firm of Maudslay, Sons and Field, of which Basset was a director. (Basset later built further wheels at Paris, Blackpool and Vienna, of which the last alone survives.) Maudslays made the axle and bearings but other firms were also involved. The steel girderwork was supplied by the Arrol Bridge and Roof Company and the forty carriages around the circumference by Brown, Marshall and Company. To promote and run the enterprise, the Gigantic Wheel and Recreation Towers Company Limited was formed. The Chicago Wheel had paid handsome dividends and the Earl's Court one was thought likely to follow suit. Several newspapers compared it with the Watkin Tower at Wembley, then being promoted by the District Railway's more affluent rival, the Metropolitan. Commented Vanity Fair: 'A revolution of the Graydon wheel will exalt the passengers in its forty cars by 300 feet above the groundlings ... it can hardly be doubted that we shall all do the circular trip at Earl's Court — rising as if in a baloon, in a comfortable carriage, without risk and "without exertion".'

The Earl's Court wheel was commenced in March 1894, when massive concrete footings were put in. Effectively completed in April 1895, it was not opened to the public until July. Its 300–foot diameter made it slightly larger than its predecessor. It weighed altogether 1,100 tons, of which the wheel itself accounted for 500 and the eight inclined columns supporting the axle 600. Originally there were to be 'recreation towers' on either side with lifts carrying visitors up to the axle, through which it would have been possible to walk, but this was not carried through. The wheel rotated by means of two 50 h. p. steam engines; a complete revolution, with interruptions so that passengers could admire the view, took twenty minutes. Each of the forty cars could accommodate forty persons, so that up to 1,600 could ride on the wheel together. In its life it conveyed two and a half million passengers. Despite an embarrassment when the wheel stuck for four and a half hours in May 1896 (the passengers were handsomely compensated for their ordeal and the episode spawned a music-hall song 'I've Got The Five-Pound Note'), its operations were uneventful and innocent. Few who travelled on it would have endorsed this pontifical verdict from The Builder: 'We have as little sympathy with this foolish kind of sensational toy as we have with Eiffel towers … It is only a pity that all the ability and cost expended in its construction should not be devoted to some more useful end than carrying coach-loads of fools round a vertical circle.' The wheel survived until 1906–7, when it had ceased to be profitable and Basset supervised its demolition.