The Cambridge Apostles, also known as the Cambridge Conversazione Society, is an elite intellectual secret society at Cambridge University, founded in 1820 by George Tomlinson, a Cambridge student who went on to become the Bishop of Gibraltar. The society is essentially a debating club. Meetings are held once a week, traditionally on Saturday evenings, during which one member gives a prepared talk on a topic, which is later thrown open for discussion; during the meetings, members used to eat sardines on toast.

The society takes its name from the idea that its members are supposedly the 12 cleverest students at Cambridge. The active membership consists largely of undergraduates, though there have been graduate student members. The society traditionally centered around King's College and Trinity College, though this is no longer the case.

Undergraduates being considered for membership are called "embryos" and are invited to "embryo parties," where members judge whether the student should be invited to join. The "embryos" attend these parties without knowing they are being considered for membership. Becoming an Apostle involves taking an oath of secrecy and listening to the reading of a curse, originally written by Apostle Fenton Hort, the theologian, in or around 1851.

The Apostles came to public attention again following the exposure of the Cambridge spy ring in 1951. At least four men with access to the top levels of government in Britain — two of them former Apostles — were found to have passed information to the KGB. The four known agents were Guy Burgess, an MI6 officer and secretary to the deputy foreign minister; Anthony Blunt, MI5 officer, director of the Courtauld Institute, and art adviser to the Queen; Donald MacLean, foreign office secretary; and Kim Philby, MI6 officer and journalist. 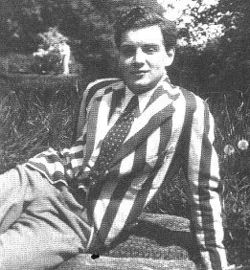 Guy Burgess, who made the Apostles famous by working for MI6 and spying for the KGB, drank himself to death in Moscow in 1963.

Although only four men were identified, there were rumors of a fifth man, a senior British intelligence officer, who was never found. Many stories linked this rumor to Victor Rothschild, another Apostle, who had supplied an apartment in London for some of the Cambridge spies to meet in, though there is no evidence that he knew about their spying activities. In 1963, American writer Michael Straight, also an Apostle, and later publisher of his family's The New Republic magazine, admitted to spying.

Of the four named spies, Guy Burgess and Anthony Blunt, both homosexual, had been members of the Apostles at a time when homosexuality seemed to be an attribute of many of the undergraduates chosen for membership, and stories persisted that the membership was mainly homosexual and Marxist. Blunt, a communist, was the first to be recruited by the KGB, during a visit to Russia in 1933. When he returned to Britain, he recruited other Cambridge students, including Straight.

As the Queen's art advisor, Blunt was knighted in 1956, but was stripped of his knighthood in 1979 after Prime Minister Margaret Thatcher publicly named him as a spy.

The well-known British playwright Alan Bennett (The Madness of George III, screenplay adaptation The Madness of King George, Talking Heads, The History Boys) creates scenes from Burgess' life in the USSR and Blunt's curatorship in a pair of one-act works called Single Spies. The short pieces are titled An Englishman Abroad—in which a sympathetic visitor learns that the Russians don't much care for, or about, the aging Burgess—and A Question of Attribution—in which Blunt confronts questions of authenticity in art and life. Usually presented as comedies, the plays exhibit a kind of warped poignancy in the treatment of the two superannuated Apostles.