xanthrocroid
492; Having a light complexion and light hair. (Scandinavian)

Ymir
128; In Norse mythology, Ymir was the founder of the race of frost giants and an important figure in Norse cosmology. He formed from the ice of Niflheim, where it met with Muspel's heat and melted. Giants came forth from Ymir's body while he slept. His legs spawned a man and a woman, who came out of his body through the armpits.

The cow Audumla had four udders of milk which fed Ymir. Audumla licked hoar frost and salt from ice, eventually forming Buri, who then fathered Bor, father of Odin, Vili and Ve.

Odin and his brothers killed Ymir. Only two giants survived the flood of Ymir's blood: Ymir's grandson, Bergelmir (son of Thrudgelmir), and his wife. Odin and his brothers used the body to create earth. His flesh filled Ginnungagap; his hair became trees; his eyebrow became Midgard; his bones became mountains; his teeth and bone fragments became stones; his blood became lakes and seas. Ymir's skull became the sky, with four dwarves holding it up. Maggots from his flesh became the race of dwarves.

His name is cognate to Yama of Hinduism. From LaborLawTalk -- really!

Ynglingasaga
133; The Ynglinga saga was originally written in Old Norse by the Icelandic poet Snorri Sturluson about 1225. He based it on an earlier Ynglingatal which is attributed to the Norwegian 9th century skald Þjóðólfr of Hvinir, and which also appears in Historia Norwegiae.Wikipedia entry; The Full Text

Young Turks
830; "gang [of] puritanical old busybodies"; a coalition of various reform groups in favor of reforming the administration of Ottoman Empire. Their movement brought about the second constitutional era through a Young Turk Revolution against the monarchy of Sultan Abdul Hamid II; 843; Wikipedia entry

Yz-les-Bains
931; French: "the baths at Yz"; "the Anarchist spa of Yz-les-Bains, hidden near the foothills of the Pyrenees, among steep hillsides"; "one of the few places on the continent of Europe where a sober Anarchist could find a decent Crocodile — equal amounts of rum, absinthe, and the grape spirits known as trois-six" 941; Perhaps an oblique reference to Aix-les-Bains (pronounced "Ex" - get it?); , a spa town of eastern France, near the Lac du Bourget, and 9 km. by rail N. of Chambéry.

Zalmoxis
957; Zalmoxis was a legendary social and religious reformer, and (possibly) Pythagorean disciple, regarded as the only true god by the Thracian Dacians (aka the Getae). According to Herodotus, the Getae, who believed in the immortality of the soul, looked upon death merely as going to Zalmoxis, as they knew the way to become immortals. Wikipedia entry

Zapata, Emiliano (1879-1919)
983; Emiliano Zapata Salazar (1879-1919) was a leading figure in the Mexican Revolution, which broke out in 1910, and which was initially directed against the dictatorship of Porfirio Díaz. He formed and commanded an important revolutionary force, the Liberation Army of the South. Wikipedia entry

Zen, Carlo (1851-1918)
867; Italian designer and cabinet-maker, in the Art Nouveau style. Some of his decorations suggest the strong influence of continental symbolism, while other objects reveal a keen awareness of geometric simplification. Zen is from a very old patrician Venetian family (Zeno, Zeneno, Geno).

Zilberfeld, Yitzhak
165; Zionist agent in Eastern Africa with his theory about Anti-Semitism

Zip
18; member of the Bindlestiffs of the Blue A.C. 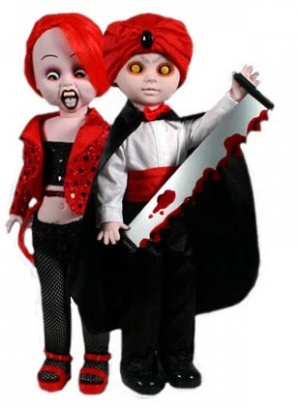 The Great Zombini & his lovely assistant Viv
For what it's worth, it seems The Great Zombini and Viv was a doll set sold exclusively at Tower Records. Some text (from this ebay auction page) that was apparently part of the dolls' snazzy coffin-shaped packaging reads as follows:

The Great Zombini has a trick for you all,
His lovely assistant split by the blade of his saw.
The crowd had gathered to see a trick,
But Zombini opted to make them sick.
As his assistant lies trapped in a box, afraid,
He severs her body with the cut of his blade.

→In an Episod of Tales from the Crypt (season 5, ep. 4 - 1993), one finds a circus artist named Zombini able to control people's minds. His assistant, Connie, falls in love with a fire eater… Infos can be found (in french, at least), here: http://www.dvdrama.com/blog/Jeremie79/2743/ (Claro, french translator of AtD)

Zoppo, Marco
726; painter of Sack of Rome, under water

Against the Day Alpha Guide
A·B·C·D·E·F·G·H·I·J·K·L·M·N·O·P·Q·R·S·T·U·V·W·XYZ top of page
Retrieved from "http://against-the-day.pynchonwiki.com/wiki/index.php?title=XYZ&oldid=12687"
Category: