Valley Tan
180; a brand of patent medicines that were produced in Salt Lake City at the Valley Tan Remedies (V.T.R.) Laboratory beginning in 1884. A brief profile of the company can be found at this website. (PDF)

Vámos, Mihály
951; "former hill-climbing champion on the Hungarian circuit" and with R.U.S.H.

Vanderjuice, Professor Heino
6; old friend of the Chums of Chance, of New Haven, and inventor of the Screw, an aerial-propulsion device for augmenting the cruising speed of the Inconvenience; of Yale University, 29; 52; and Merle Rideout, 58; 355; at First International Conference on Time-Travel, 407; 571; in Tierra del Fuego, 793; in Lwów with Kit, 1078;

Vector
156; In mathematics, a vector space (or linear space) is a collection of objects (called vectors) that, informally speaking, may be scaled and added. More formally, a vector space is a set on which two operations, called (vector) addition and (scalar) multiplication, are defined and satisfy certain natural axioms. Vector spaces are the basic objects of study in linear algebra, and are used throughout mathematics, science, and engineering. 158; 165; vectorists, 534; and Monotony, 560; "in five dimensions" 675; Wikipedia entry

veil
140; A caul or veil (Latin: Caput galeatum) is a thin, filmy membrane, the remnants of the amniotic sac, that covers or partly covers the newborn mammal immediately after birth. The Caul were even sold durning Greek and Roman times to statemen, for it was believed to wear one would bring wisdom, honor, truth,and pyschic powers and protection against evil. In Icelandic tradition, the caul is associated with a guardian spirit called a fylgja. This fylgja can take many forms after birth, including an animal, an inanimate object (such as a cloak), or another human being, and often serves as a kind of warning against potential danger. It is a very old idea that a child born with a caul over its face will be endowed with special powers or gifts.

Velebit
817; Velebit is the largest though not the highest mountain in Croatia. Its highest peak is the Vaganski Vrh at 1757 m. Wikipedia entry 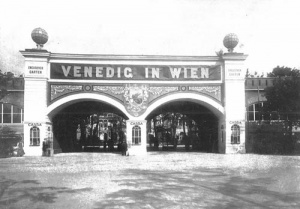 
717; In May 1895, the large entertainment park "Venice in Vienna" opened in the Viennese Prater. Entrepreneur Gabor Steiner and architect Oskar Marmorek provided gondolas on artificial channels, cafés, restaurants, Verkaufsbuden and also a Operettenbühne.

Vesna
839; Danilo's sister who sings "in a hasheesh joint down in the Bara"

Veta Madre
306;The "Mother Lode" of Mexico [1] in Guanajuato

Vibe, Scarsdale
31; The village of Scarsdale, New York, is one of the wealthiest communities in the United States. Thus, the "Scarsdale vibe" would be an aura of wealth, appropriately; financing Tesla in Colorado Springs, 31; "Wealth", 99; Foley Walker as Scarsdale's Civil War Substitute, resulting in "The Twin Vibes", 100-102; financing the Vormance Expedition, 130; manor on Long Island, 159; coveting his enemies' bloodline, 332; "Smite early and often" 333; in Europe headed for Venice to buy Renaissance art, 657, 669; and Foley Walker in Venice, 724;

Villa, Francisco "Pancho" (1878-1923)
983; one of the foremost leaders of the Mexican Revolution and provisional governor of the Mexican state of Chihuahua in 1913 and 1914. Villa mostly operated in the northern theatre of the war, centering on Chihuahua, in the north of Mexico. Villa is often referred to as El centauro del norte (The Centaur of the North), due to his celebrated cavalry attacks as a general. Wikipedia entry

Villa, Gaston
"and His Bughouse Bandaleros" 374;

vint
667; Russian card-game, similar to both bridge and whist and it is sometimes referred to as Russian whist. Vint means a screw in Russian, and the name is given to the game because the four players, each in turn, propose, bid and overbid each other until one, having bid higher than the others care to follow, makes the trump, his vis-d-vis becoming his partner; Wikipedia entry

von Sanders, Liman (1855-1929)
967; a German general who served as adviser and military commander for the Ottoman Empire during World War I. Wikipedia entry

Vormance, Dr. Alden
114; commander of the schooner Étienne-Louis Malus, engaged on an expedition to the Arctic; "on sabbatical from Candlebrow University, where he ordinarily headed the Department of Mineralogy" 130; "The scientists of the Vormance Expedition had continued to believe it was a meteorite they were bringing back, like Peary and other recent heroes of science" 149; "Word was about that Alden Vormance was getting up a party to go north and recover a meteorite" 170;

Against the Day Alpha Guide
A·B·C·D·E·F·G·H·I·J·K·L·M·N·O·P·Q·R·S·T·U·V·W·XYZ top of page
Retrieved from "http://against-the-day.pynchonwiki.com/wiki/index.php?title=V&oldid=13493"
Category: