From an article by Gary Myers of Yoshino Japanese Antiques

I recently read an issue of Scientific American that was entirely devoted to the concept of time. There were a number of interesting articles in the magazine. One article addressed physicists' concept of time versus everyone else's. But the one that intrigued me the most described how different cultures perceived time differently. This article got me thinking about time and its measurement in old Japan and how it differed from the west. I thought it would be interesting to share with you the methods used to mark time in old Japan.

Prior to January 1, 1873, Japan's civil calendar was based on lunar cycles rather than the west's solar (Gregorian) calendar. On that date, Japan adopted the western system of time and date keeping. Since the lunar calendar followed the cycles of the moon, its year was about five days shorter than that of the solar calendar. Just as our Gregorian calendar is off by six hours each year (February 29 every leap year makes up for it), the lunar calendar had to add a 13th month every six years or so to make it coincide with the natural cycle. This extra month in the lunar calendar is called the intercalated month. 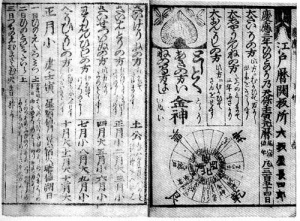 Lunar calendar, 1867
So how did Japan's farmers keep things straight since their livelihood depended more on the natural cycle of the sun? They needed to know when was the right time to plant and harvest the crops. The civil calendar didn't suit their needs, so they used an ancient solar calendar developed by Chinese astronomers. The old solar calendar was measured between two successive winter solstices. The winter solstice was the mid-point of twelve equal divisions called setsu which were approximately 30.44 days in duration. The beginning of the setsu is called sekki and the mid point of the setsu was called a chuki. Each of the twenty-four sekki and chuki had its own name which was related to weather or agricultural phenomena. If we line up our current Gregorian calendar with the old solar calendar we would find that around February 4th would be the "New Year" which marked the beginning of spring; May 5th would be the beginning of summer; August 8 would be the begining of autumn; and November 8 would be the beginning of winter. Other than the farmers, the rest of Japan followed the lunar civil calendar. In the lunar calendar above is a directional guide which indicates auspicious days to travel in certain directions.

Like the west's, each date of a lunar calendar signifies the year, the month and the day of the month. There were four different ways years have been designated in Japan, not counting the current Anno Domini method. One is the Nengo method , in which a particular era is named by the Imperial court denoting when an Emperor ascended to the throne. Generally that ascension was about a year after the prior emperor either abdicated or died. Successive years of the era are noted by a number. Premodern era names were not reign names. Generally era names signified a change of political climate, the first of which was Taika which is noted for the Taika Reforms of 645 A.D. Beginning with Emperor Meiji, the era names are the given posthumous names of the emperors, for example we are now in the year Heisei 14 marking Emperor Akihito's reign. Nengo era names were also periodically changed in the 1st and 58th year of the sexagenary cycle (60 year cycle explained below) because they were considered good luck years. Sometimes disasters could result in changing an era's name just to change the bad luck associated with it. 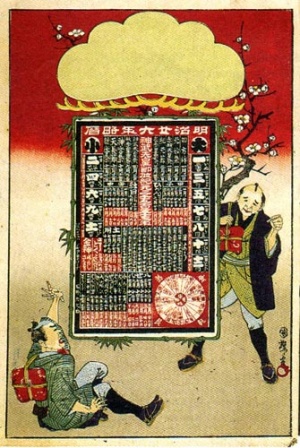 Ryakureki (single-page calendar), 1893
The other method of designating the year is the Jikki-Junishi, the ten elements and twelve zodiac signs method. Most of eastern Asia has used two sets of terms to denote the year; combined these represent the Jikki-Junishi, the sixty year cycle, which happens to be the least common multiple of 10 and 12. The ten elements are: both the elder and younger brother elements of wood, fire, earth, metal, and water. The zodiac signs are: the rat, ox, tiger, hare, dragon, snake, horse, goat, monkey, rooster, dog, and wild boar. The succession in years is a combination of first element- first zodiac, the next in the cycle is second element-second sign and so on. We are now in the 19th year of the cycle, which is called Mizunoe-Uma, elder brother water - year of the horse. As you are probably aware, a lot of credence is paid to the year a person is born and the personality attributes associated with that zodiac sign. It is also thought that the year's events will be determined by the zodiac sign. A person born in the year of the horse may be luckier this year than in others.

A third method of year designation began in the early Meji period (1868 - 1912) and was called the "Imperial Era". The year was marked as the number of years in the imperial lineage from the first emperor onward. It was designated by a number with the word kigen, which means the beginning of the dynasty, prefixed to it. This method reflects a period of time when Japan was trying to establish itself as a country rather than a group of provinces. The Imperial heritage was the strongest common thread of the Japanese people. This method was discontinued after WWII. The fourth method is for reign-years prior to the Nengo system. It differs from the Nengo in that it starts counting the full calendar year of the reign rather than a year after ascention to the throne. It is denoted with the word tenno (sovereign) after it to differentiate it from the Nengo system. The above woodblock print is a single page calendar called a ryakureki, and is dated 1893.

Months are generally noted by a number, with the exception of the first month, which is called Shogatsu (beginning month), next would be Nigatsu, literally second moon, etc. In addition to that designation, months also have informal and poetic names. Mutsuki, the first month is considered the month of affection. The second month is Kisaragi - the month of putting on more clothes. Other month's names are such things as rice planting, month of writing poetry, month of falling leaves and so on. Months that were intercalary were designated with the character jun attached to the name of the preceding month.

Of course, prior to the western time-keeping system, knowing the time was neither precise nor a critical concern. There were two ways premodern Japan marked time throughout the day. The day was divided into two periods: sunrise to sunset and sunset to sunrise. Each of those two intervals was divided into six divisions. So the divisions or "hours", if you will, were approximately two hours in western time. The two intervals marked by dawn and dusk were not of equal duration (only equal at the two equinoxes). The twelve divisions were denoted by the zodiac signs of Junishi. The hours went in this order with their approximate time: rat 11:00 PM-1:00 AM, ox 1:00-3:00 AM, tiger 3-5:00 AM, hare 5-7:00 AM, dragon 7- 9:00 AM, snake 9-11:00 AM, horse 11:00 AM - 1:00 PM, goat 1-3:00 PM, monkey 3-5:00 PM, rooster 5- 7:00 PM, dog 7-9:00 PM, boar 9-11:00 PM. The "hours" were also represented by numbers, i.e. the hour of the rat was the nineth hour which would decrease by each hour to the fourth hour, then start with another nineth hour in the daytime. In addition to telling the time, the twelve divisions also denoted directions which meant that some days were more auspicous to travel in a certain direction than others, as we mentioned before.