It appears that many of the sex-connected names are combinations of male and female.

You may first want to read Uncyclopedia's entry for "Penis"...

The letter U, the twentieth letter of the ancient Roman alphabet, is a differentiated form of the letter V, and the majuscule (capital) of both were represented by the letter V into the 17th century.

The shape of the letter can be seen as both masculine (phallic) and feminine (a recepticle or, as explained below, a uterus).

Thus, Candlebrow U. is possibly both masculine (the phallic candle's brow - see below) and feminine; Ewball (U-ball) Oust (a deodorizer that comes in a phallic-shaped container);

This is why the letters Q and U always occur together in those languages that use the Roman alphabet. To depict the vulva of the Mother Goddess without her uterus would be an obscenity. That would reduce the Mother Goddess to a sex symbol. The EarthMother Goddess would be just another Hollywood style sex goddess. Isis was a great powerful enlightened being. The goddess of love is a deified ancestress who was deified for better reasons than for the pleasures of the moment.

The letters q and u also have secondary meanings. In Pagan religious symbolism, water represents life. The letter u also represents a well. The letter q represents the water from the well. The analogy of the womb and the well is an old one. They're both sources of life.

U stands for union and the upside-down U stands for intersection (both are operators on sets). A U-set is a set of uniqueness.

U was carved by the Romans as V, and is still represented this way on modern buildings. U and V were interchangable until the 1500's, first being differentiated on the continent, and then later in England in the 1600's, though V was sometimes used until as late as the 1700's.

"T.W.I.T." sounds like — no, is — a cross between "clit" and "twat." And, natch, it's headed up by Grand Cohen Nicholas Nookshaft (Nooky shaft: a vulgarism for "vagina"? Duh... A-and I'll be damned if that tetractys isn't an inverted beaver! (See "Beavers of the Brain") (Shades of V. ...) And that Yashmeen certainly is a very sexual woman.

And this from The Hebrew Heathen Religion:

Another favorite Hebrew and universal emblem is the triangle, the perfect representation of the pubic hairs on man and woman. The famous six-pointed star of David, the national emblem of Israel, and always to-day blazoned on the banners of Zion, is formed by superimposing the male on the female pubic triangle, and is of very sacred significance. The pyramids of Egypt, as of Central America, are faced by four triangles, representing in Egypt the "four great gods"' purely phallic and very sacred.

Ex voti of Wax, from Isernia
Yes, "Candlebrow"? Well, remember Randolph St. Cosmo, the ship commander? Historically, there are two versions of the 3rd century CE figure St. Cosmo (aka St. Cosmas): the "randy" St. Cosmo, aka the "modern Priapus," and the saintly martyred St. Cosmo of Church lore. Pynchon, it seems, is connecting Randolph St. Cosmo to the former. "Randy," as astute observers will note, is an adjective which means "horny." There's a distinct sexual thread woven throughout Against the Day — a-and Heartsease, St. Cosmo's mate, is the first to get pregnant! — so this seems to fit right in. Read more about the historical St. Cosmo...; and Wikipedia entry

In Mason & Dixon, Pynchon gave us the Veery brothers, Cosmo and Damian, who are professional effigy makes in Philadelphia! And, just to make it interesting, "He's a rare Wax Artist, our Cosmo is." (p. 290) (Note: Wax phallus effigies were offered by the women to St. Cosmo at the festivals held in his name, as shown above, with the utterance "Blessed St. Cosmo, let it be like this.")

So what is a "candlebrow"? Consider those phallic ex voti candles offered up to St. Cosmo. The head of the candle-phallus, brow shaped, sits atop the cyclindrical candle-shaft and is, metaphorically, the candle's brow. And, natch, Gideon Candlebrow made the bucks necessary to fund Candlebrow U. with the miracle product "Smegmo," the "Messiah of kitchen fats" — and we all know what smegma is.

The Biblical Gideon (Wikipedia) was associated with Phallus worship which was not considered at all shocking back in the day. When Gideon was asked by the Israelites to rule over them, he demurred stating that Yahveh shall rule over them, and he called on the people for all their golden ornaments, and of these be made the golden ephod (conventionally viewed as a priestly apron; controversially viewed as a phallus). The ephod was thus Yahveh or his idol:

The first notion of a supreme creator among early peoples was the great and glorious sun, giving light and heat and life; all early peoples, including the Hebrews, worshipped the sun, the beautiful, visible, shining agency of creation, as they did to the end, and as some primitive peoples do to this day.

Life was a wonderful thing to them, and creation the great miracle. Man discovered in himself the power to reproduce this miracle of creation, to recreate life; and the organ of procreation became from the earliest times an object of veneration and of worship, as the human representative of the divine Creator and Life-giver. The woman, too, or "womb-man" (as the derivation of the Anglo-Saxon word suggests), was an indispensable cooperator in this work of wonder, and almost equal veneration was paid to the organ by which she participated in the creative work and brought forth life. "Eve" was "Life" from the beginning of the human species. "And the man called his wife's name Havvah [חוה - Eve], because she was the mother of all living (Gen. 3: 20 ).

Hence, the human organs of life, symbolized as the "staff of life" and the "door of life," through which life entered and issued, were all through ancient history, Biblical and profane, and are at present among many peoples, sacred objects of worship.' Not only was it the soul of the Semitic religion, but of the religions of Egypt, [The Encyclopedia Biblica speaks of "the special sacredness of the generative organs," and says: "The organ of it in man could by the primitive Semites be taken as symbolizing the deity" (Vol. 3: col. 3453 ).] India, Greece, Rome, all Europe, and all primitive America. Its emblems have been unearthed in Missouri.

Gideon, the man of the gods, "made an ephod [of gold] and put it in his city, even in Ophrah: and all Israel went thither a whoring after it" (Judges 8: 27). This phallic idol was, at the time, expressly recognized as entirely proper and orthodox in the worship of Yahveh, who was personified by the image. The people had requested Gideon to set himself up as king and rule over them; but Gideon replied, "I will not rule over you; Yahveh shall rule over you." He called on the people for all their golden ornaments, and of these be made the golden ephod. The ephod was thus Yahveh or his idol. It was evidently the writer or editor of the Book of Judges, centuries later, who used the opprobrious term "went a whoring after" this sacred statue of Yahveh, which he says "became a snare unto Gideon and to his house" (Judges 8: 27). [1]

It should be noted that viewing Gideon's Ephron as a phallus idol is a more marginalized interpretation, the conventional view seeing it as an apron worn by Hebrew priests, as stated in this article from the Catholic Encyclopedia:

According to Judges, viii, 26 sq., Gedeon made an ephod out of part of the spoils taken from the Madianites, their golden earlets, jewels, purple raiment, and golden chains. All Israel paid idolatrous worship to this ephod, so that it became a ruin to Gedeon and all his house. Some writers, following the Syriac and Arabic versions, have explained this ephod as denoting a gold casing of an oracular image. But there is no other instance of such a figurative meaning of ephod; besides, the Hebrew verb used to express the placing of the ephod on the part of Gedeon denotes in Judges, vi, 37, the spreading of the fleece of wool. The opinion that Gedeon's ephod was a costly garment like that of the high-priest, is, therefore, preferable.

Pynchon consistently calls it Candlebrow U. — instead of simply Candlebrow or Candlebrow University — because the letter's shape, like the inverted-vagina shape of the Tetractys, echoes its phallic connotation or, possibly, feminine (see above), as the letter "U" can be interpreted as symbolic of either gender. Pynchon similarly emphasizes the phallic by using "Dick" Counterfly (with the quotes) instead of simply Dick, so we have "Chick" and "Dick" - feminine & masculine. Dana Medoro, in Pynchon Notes explored a similar thematic thread (menstruation) in V. ("It's V period, damn it!"), where part of Pynchon's strategy was using letter shapes themselves to reinforce themes. Dana read her paper at the European Pynchon Conference in 1998, at King's College.

Or, heck, maybe it's just Pynchon's oblique way of saying "fuck you"...

Sure, it's just a hunch right now, and I'll look into it further. But I think there's something there, oh yes....

Phallic References in Against the Day

From the obvious to the oblique:

In 1973, Jerry Lee Lewis recorded an homage to his oral talents entitled "Meat Man" in which he brags of having "a maytag tongue with a sensitive taste." This fits in with the sexual angle. Read the lyrics...

And Meatman in German is Fleischmann, and we all know Fleischmann's makes those creamy spreads, reminiscent of Gideon Candlebrow's brainchild Smegmo. 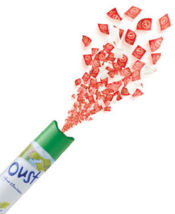 Oust is a odor eliminator the container of which has a quite phallic shape. And there's that phallic "U" again (See p.130), conjoined with "ball" which the Oxford English Dictionary defines as "5. Any rounded protuberant part of the body." It is thought that "ball" is derived from the Indo-European word bhel, meaning to blow, swell; with derivatives referring to various round objects and to the notion of tumescent masculinity. Derivatives include boulevard, boulder, phallus, balloon, ballot, and fool. [2] So Ewball Oust plays into The Sexual Angle in AtD, where sexual names proliferate.

Lewis' surname may be connected to basalt, whose origin is the Latin basaltes, a variant of the Greek basanites, from the Greek basanos, 'touchstone' (indicating Basnight may be a schist, a bellwether, or a barometer).

Basalt is a dark, fine-grained volcanic rock that sometimes displays a columnar structure. It is typically composed largely of plagioclase, a feldspar, with pyroxene (pyro-, of or relating to fire, + the Greek xenos, 'stranger'), a prismatic crystal, and olivine.

"Basnight" could also by a process of wacky subsitution (i.e., bas+night, bas+knight, bas chevalier, bachelor) associate Lewis with the Knights Bachelor, the earliest form of English knighthood but ironically also the lowest in order of precedence. Knights Bachelor were landless knights who belonged to no recognized Order (like the Knights Hospitalers, Knights Templars or Knights of the Garter), so they had no banner to call their own, fighting instead under the banner of whichever Order contracted their services. The sort of Joe Dokes of the Knightworld that Bill Mauldin might have sketched. Although Lewis is himself no bona fide bachelor, such an association seems fitting in a book set into motion by those daring young bachelors, the Chums of Chance.

Or maybe, in a simpler but not fulfilling explanation, Lube Ass, Lew Bas.