President Cleveland called Congress to a special session to repeal the Sherman Silver Purchase Act, in order to stop the drain on US gold reserves. The repeal was passed in the House by a vote of 239-108, and by a vote of 48-37 in the Senate. 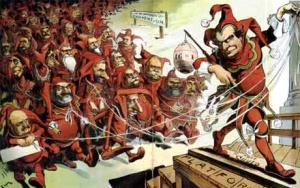 Silver Act Political Cartoon
President Cleveland was convinced that the drain on US gold reserves was due to the Sherman Silver Act. He called Congress into special session, and was able to convince them to repeal the act. However, his action strongly divided the Democratic party between those who supported the gold standards (called "gold bugs") and the Southerners and Westerners who supported continued silver purchases.

The repeal of the Silver Act failed to stem the drain on American gold reserves. At this point, President Cleveland agreed to sell gold bonds at a discount to Wall Street bankers like J.P. Morgan, in return for their cooperation in stemming the withdrawal of gold from the Treasury.

The effects of repealing the "Sherman Silver Purchase Act" in 1893 left deep scars in the economy of Colorado for many years to come.

Silver was King in Colorado in the 1880's. Men where making fortunes in mining, railroading and banking industries. Over-extended investments and sometimes sheer extravagance ruled the day.

To shed some light on what led to Colorado's severe Depression in the 1890's the currency system of the United States must be examined.

The US, since the days of George Washington, had based it's system on "bimetallism"...use of both gold and silver in legal coinage.

The Gold Rush to California in 1849 resulted in such large quantities of gold found that the value of gold became less. Previous to this, gold was 16 times more valuable (16x more silver in a silver dollar than gold in a gold dollar).

People began melting down silver dollars and using the silver for other purpose, such as jewelry. In 1873 Congress terminated the making of silver coins and placed the country on a "gold standard".

The great silver strikes of the 80's in the San Juan mountains and in places like Leadville made silver prices fall even further, but the mining of silver continued to be a profitable venture.

In 1890, President Benjamin Harrison agreed to purchase $4.5 million ounces of silver a month. The "Sherman Silver Purchase Act" was passed by Congress and the price of silver shot up from .84 cents to $1.50 an ounce, but it's market value would drop from this high.

This created fear among eastern republican business men and foreign investors that the gold dollar would be replaced by a less valuable silver dollar. Stores and banks began to go out of business and gold became a commodity to be hoarded.

The pay for mine workers continued to decrease and the hours of work became longer. The unrest of miners resulted in strikes that impacted the economy of the state as well as the mining industry.

1893 spelled the end of an era of silver by the repeal of the "Sherman Silver Act". Almost immediately mines and smelters began to shut down in Colorado. Silver prices dropped from .83 cents to .62 cents an ounce in one 4 day period. Banks closed their doors and real estate values plummeted.

The repel of the silver act was felt around the country but not as severely as it was in Colorado. Colorado was producing almost 60% of the nations silver. Thousands of out-of-work miners flooded into Denver swelling its ranks of the unemployed.

Denver was in an economic crisis, and could not continue taking care of the jobless. Railroad offered reduced, and in some cases free, fares out of Denver. Denver's population in 1890 dropped from 106,000 to 90,000 in 1895.

State expenses were soaring with hard winters, agricultural distress in the grasslands and the over expansion of industry.

One bright spot in the economy was the large gold strike in 1891 at Cripple Creek, later called the "world's greatest gold camp".

The passage of the Gold Standard Act in 1900 resulted in a further price drop of silver and the few remaining silver camps in Colorado were given a death blow.

So ended an era, and one that the state would be long in recovering from. But recover it did to become one of the most prosperous states in the union.