Oliver W. Heaviside was English electrical engineer who adapted complex numbers to the study of electrical circuits. He developed techniques for applying Laplace transforms to the solution of differential equations. In addition, he reformulated Maxwell's field equations in terms of electric and magnetic forces and energy flux. In 1902 Heaviside correctly predicted the existence of the ionosphere, an electrically conducting layer in the atmosphere, by means of which radio signals are transmitted around the earth's curvature. 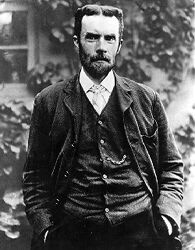 Oliver W. Heaviside (1850-1923)
Oliver W. Heaviside was born on May 18, 1850 in Camden Town, London, England, the youngest of four sons of Thomas Heaviside, an engraver and watercolorist, and Rachel Elizabeth West, a sister-in-law of the famous physicist Sir Charles Wheatstone. Oliver Heaviside was born in a low social class of Victorian England in the same London slums as Dickens was. He caught scarlet fever when he was a young child and this affected his hearing. This was to have a major effect on his life making his childhood unhappy with relations between himself and other children difficult. However his school results were rather good and in 1865 he was placed fifth from 500 pupils.

Academic subjects seemed to hold little attraction for Heaviside however and at age 16 he left school. Perhaps he was more disillusioned with school than with learning since he continued to study after leaving school, in particular he learnt Morse code, studied electricity and studied further languages in particular Danish and German. He was aiming at a career as a telegrapher and in this he was advised and helped by his uncle Charles Wheatstone. In 1868 Heaviside went to Denmark and became a telegrapher. He progressed quickly in his profession and returned to England in 1871 to take up a post in Newcastle upon Tyne in the office of Great Northern Telegraph Company which dealt with overseas traffic.

Heaviside became increasingly deaf but he worked on his own researches into electricity. While still working as chief operator in Newcastle he began to publish papers on electricity, the first in 1872 and then the second in 1873 was of sufficient interest to James Clark Maxwell that he mentioned the results in the second edition of his Treatise on Electricity and Magnetism. Maxwell's treatise fascinated Heaviside and he gave up his job as a telegrapher and devoted his time to the study of the work. He later wrote: "I saw that it was great, greater, and greatest, with prodigious possibilities in its power. I was determined to master the book... It took me several years before I could understand as much as I possible could. Then I set Maxwell aside and followed my own course. And I progressed much more quickly."

Although his interest and understanding of this work was deep, Heaviside was not interested in rigour. His poorest subject at school had been the study of Euclid, a topic in which the emphasis was on rigorous proof, an idea strongly disliked by Heaviside who later wrote: "It is shocking that young people should be addling their brains over mere logical subtleties, trying to understand the proof of one obvious fact in terms of something equally .. obvious."

Despite this hatred of rigour, Heaviside was able to greatly simplify Maxwell's 20 equations in 20 variables, replacing them by two equations in two variables. Today we call these 'Maxwell's equations' forgetting that they are in fact 'Heaviside's equations'. Similar work was done by Hertz who actually got the credit for that. But in the fine print Hertz admits his ideas came from Heaviside. FitzGerald wrote: "Maxwell's treatise is cumbered with the debris of his brilliant lines of assault, of his entrenched camps, of his battles. Oliver Heaviside has cleared these away, has opened up a direct route, has made a broad road, an has explored a considerable trace of country."

Heaviside results on electromagnetism, impressive as they were overshadowed by the important methods in vector analysis which he developed in his investigations. His operational calculus, developed between 1880 and 1887, caused much controversy however. Heaviside introduced his operational calculus to enable him to solve the ordinary differential equations which came out of the theory of electrical circuits. He replaced the differential operator d/dx by a variable p transforming a differential equation into an algebraic equation (Laplace Transforms). The solution of the algebraic equation could be transformed back using conversion tables to give the solution of the original differential equation. Although highly successful in obtaining the answer, the correctness of Heaviside's calculus was not proved until Bromwich's work.

Burnside rejected one of Heaviside's papers on the operational calculus, which he had submitted to the Proceedings of the Royal Society, on the grounds that it "...(it) contained errors of substance and had irredeemable inadequacies in proof."

Tait championed quaternions against the vector methods of Heaviside and Gibbs and sent frequent letters to Nature attacking Heaviside's methods. Heaviside went on to achieved further advances in knowledge, again receiving less than his just deserts. In 1887 William H. Preece, a GPO technical expert, wrote a paper on clear telephone circuits. His paper is in error and Heaviside pointed this out in Electromagnetic Induction and its Propagation published in the Electrician on June 3, 1887. Heaviside, never one to avoid controversy, wrote: "Sir William Thomson's theory of the submarine cable is a splendid thing. Mr. Preece is much to be congratulated upon having assisted at the experiments upon which Sir William Thomson based his theory; he should therefore have an unusually complete knowledge of it. But the theory of the eminent scientist does not resemble that of the eminent scienticulist, save remotely."

In this paper Heaviside gave, for the first time, the conditions necessary to transmit a signal without distortion. His idea for an induction coil to increase induction was never likely to be taken up by the GPO while Preece was in charge of research proposals. Heaviside dropped the idea but it was patented in 1904 in the United States. Michael Pupin of Columbia University and George Campbell of AT&T both read Heaviside's papers about using induction coils at intervals along the telephone line. Both Campbell and Pupin applied for a patent which was awarded to Pupin in 1904.

Not all went badly for Heaviside however. Thomson, giving his inaugural address in 1889 as President of the Institute of Electrical Engineers, described Heaviside as an authority. Lodge wrote to Nature describing Heaviside as a man "whose profound researches into electro-magnetic waves have penetrated further than anyone yet understands." Heaviside was elected a Fellow of the Royal Society in 1891, perhaps the greatest honour he received. Whittaker rated Heaviside's operational calculus as one of the three most important discoveries of the late 19th Century.

In 1902, Oliver Heaviside and the American electrical engineer Arthur Edwin Kennelly independently and almost simultaneously, announced the probable existence of a layer of ionized gas high in the atmosphere that affects the propagation of radio waves. This layer, formerly called the Heaviside or Kennelly-Heaviside layer, is one of several layers in the ionosphere. Its existance was proved in 1923 when radio pulses were transmitted vertically upward and the returning pulses from the reflecting layer were received.

It would be a mistake to think that the honours that Heaviside received gave him happiness in the last part of his life. On the contrary he seemed to become more and more bitter as the years went by. In 1908 Heaviside moved to Torquay where he showed increasing evidence of a persecution complex. There he lived out his last 25 years in a bitter retreat. He signed the initials W.O.R.M. after his name. That didn't stand for anything more than worm. For that was all he could see when he looked into other people's eyes. His neighbours related stories of Heaviside as a strange and embittered hermit who replaced his furniture with... "granite blocks which stood about in the bare rooms like the furnishings of some Neolithic giant. Through those fantastic rooms he wandered, growing dirtier and dirtier, and more and more unkempt - with one exception. His nails were always exquisitely manicured, and painted a glistening cherry pink."

Oliver W. Heaviside died on 3 February 1925 in Paignton, Devon, England, in poverty as a recluse.

Perhaps Heaviside has become more widely known due to the Andrew Lloyd Webber song "Journey to the Heaviside Layer" in the musical Cats, based on the poems of T.S. Eliot although it is doubtful if many people understand the greatness and significance of the achievements of this sad misunderstood genius.

Few people know that the words inductance, capacitance, and impedance were given to us by the great English physicist and engineer, Oliver Heaviside, who also pioneered in the use of Laplace and Fourier transforms in the analysis of electric circuits, first suggested the existence of an ionized atmospheric layer (now called the ionosphere) that can reflect radio waves, and is said to have predicted the increase of mass of a charge moving at great speeds before Einstein formulated his theory of relativity. He not only coined the word impedance but introduced its concept to the solution of ac circuits.

(Compiled from various biographies of Heaviside on the Prestigious Internet)