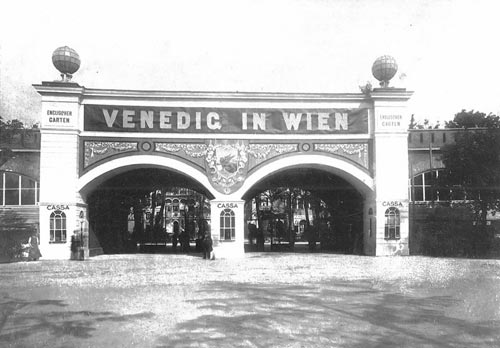 Venedig in Wien ("Venice in Vienna")

In 1895, the amusement area "Venice in Vienna” was established, in whose midst one of the landmarks of the city, the Riesenrad, appeared in 1897. The Prater became a place where everyone finds enjoyment.

The "better” class of people came here in their horse-drawn carriages, military cadets and laundry girls met on secret dates, one found barrel organs, Heurigen singers and ladies orchestras – and some of the great composers of their time, such as the Waltz King Johann Strauss or the composers Joseph Lanner and Carl Michael Ziehrer performed here.

A somewhat more comprehensive description (in German) is here, there are also photos and a map. On these photos the fake Venice looks fairly credible, with one notable exception: Handrails along the canals.

This page reveals one temporal problem: Apparently the Venetian buildings were torn down in 1901, and in 1902 the area was restructured into "Blumenstadt" ("Flower City") and 1902 into "Elektrische Stadt" ("Electric City").