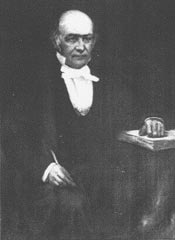 Sir William Rowan Hamilton
Most mathematicians have heard the story of how Hamilton invented the quaternions. In 1835, at the age of 30, he had discovered how to treat complex numbers as pairs of real numbers. Fascinated by the relation between complex numbers and 2-dimensional geometry, he tried for many years to invent a bigger algebra that would play a similar role in 3-dimensional geometry. In modern language, it seems he was looking for a 3-dimensional normed division algebra. His quest built to its climax in October 1843. He later wrote to his son:

Every morning in the early part of the above-cited month, on my coming down to breakfast, your (then) little brother William Edwin, and yourself, used to ask me: "Well, Papa, can you multiply triplets?" Whereto I was always obliged to reply, with a sad shake of the head: `No, I can only add and subtract them".

The problem was that there exists no 3-dimensional normed division algebra. He really needed a 4-dimensional algebra.

Finally, on the 16th of October, 1843, while walking with his wife along the Royal Canal to a meeting of the Royal Irish Academy in Dublin, he made his momentous discovery:

That is to say, I then and there felt the galvanic circuit of thought close; and the sparks which fell from it were the fundamental equations between i,j,k; exactly such as I have used them ever since.

And in a famous act of mathematical vandalism, he carved these equations into the stone of the Brougham Bridge:

He spent the rest of his life working on quaternions. He even wrote a poem about them which presaged the unification of space and time in 4-dimensional spacetime:

Or high Mathesis, with her charm severe,
Of line and number, was our theme; and we
Sought to behold her unborn progeny,
And thrones reserved in Truth's celestial sphere:
While views, before attained, became more clear;
And how the One of Time, of Space the Three,
Might, in the Chain of Symbol, girdled be:
And when my eager and reverted ear
Caught some faint echoes of an ancient strain,
Some shadowy outlines of old thoughts sublime,
Gently he smiled to see, revived again,
In later age, and occidental clime,
A dimly traced Pythagorean lore,