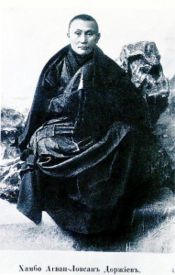 Agvan Dorjiev
Agvan Dorjiev (1853/54–1938) was an ethnic Buriat who trained as a Buddhist monk in Tibet.He was one of the tutors of the 13th Dalai Lama and was his representative at the Russian court. He played a great role in the international political life, establishing various relations between Tibet and Russia.

The British believed that Dorjiev had created the Shambala Russian myth. Ekai Kawaguchi, a Buddhist monk from Japan who visited Tibet at the turn of the 20th century, claimed to have heard of a pamphlet in which Dorjiev wrote “Shambhala was Russia. The Emperor, moreover, was an incarnation of Tsongkhapa, and would sooner or later subdue the whole world and found a gigantic Buddhist empire”.

The religiously-based purpose of Agvan Dorjiev was the foundation of a Lamaist-oriented kingdom of the Tibetans and Mongols as a theocracy under the Dalai Lama ... [and] under the protection of Tsarist Russia ... In addition, among the Lamaists there existed the religiously grounded hope for help from a ‘Messianic Kingdom’ in the North ... called 'Northern Shambhala’. At the center of Dorjiev’s activities in Russia stood the construction of a three-dimensional mandala — the Buddhist temple in St. Petersburg. Regarding the décor, it is perhaps also of interest that there was a swastika motif which the Bolsheviks knocked out during the Second World War. Buddhist temple in St. Petersburg there was sufficient room for several lamas, who looked after the ritual life, to live on the grounds. Dorjiev had originally intended to triple the staffing and to construct not just a temple but also a whole monastery. This was prevented, however, by the intervention of the Russian Orthodox Church.

Officially, the buddhist shrine was declared to be a place for the needs of the Buriat, Tuva, mongol, and Kalmyk minorities in the capital. With regard to its occult functions it was a tantric mandala with which the Kalachakra system was to be transplanted into the West. From the lamas’ traditional point of view, founding a temple is seen as an act of spiritual occupation of a territory. Such sacred buildings as the Kalachakra temple in St. Petersburg are cosmograms which are employed by the lamas as magic seals in order to spiritually subjugate countries and peoples.