(Redirected from Tarahumare Indians of Mexico)
Unknown Mexico:
A Record of Five Years' Exploration Among the Tribes of the
Western Sierra Madre; In the Tierra Caliente of Tepic and Jalisco;
and Among the Tarascos of Michoacan (London, 1903)


Member of the Society of Sciences of Norway; Associe Etranger de la 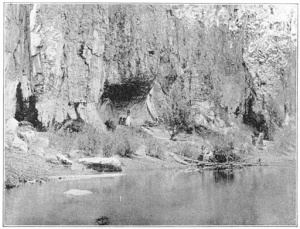 Inhabited Cave, the Home of a Tarahumare Belle
[Extract: About the 1892 trip to the Sierra Madre]

This time we came upon Cave-Dwellers. The Tarahumare Indians of the Sierra Madre, one of the least known among the Mexican tribes, live in caves to such an extent that they may properly be termed the American Cave-Dwellers of to-day. I determined to study these interesting people, especially the so-called gentiles (pagans), and as this was not practical, even with the present reduced size of the expedition, I gradually disbanded the entire company and at last remained alone.

By selling most of my animals, and a large part of my outfit, and through the untiring efforts of two American ladies, whose friendship I highly esteem, I was enabled to continue my researches alone until August, 1893, when I took my Tarahumare and Tepehuane collections to Chicago and exhibited them at the World's Fair. Extensive vocabularies of the Tarahumare and Tepehuane languages, as well as a vocabulary of the now almost extinct Tubares, were among the results of this expedition, besides anthropological measurements, samples of hair and osseous remains.

The great possibilities Mexico offers to ethnology proved an irresistible incentive to new researches, and seeing the results of my previous expeditions, the American Museum of Natural History of New York again sent me out on what was to be my third and most extensive Mexican expedition, which lasted from March, 1894, to March, 1897. During these three years I again travelled alone, that is, without any scientific assistants, at first with two or three Mexicans. Soon, however, I found that my best companions were the so-called civilised Indians, or even Indians in their aboriginal state, who not only helped me by their mere presence to win the confidence of their tribesmen but also served me as subjects of observation. As before, I stopped for months with a tribe, discharging all alien attendants, and roughing it with the Indians. In this way I spent in all a year and a half among the Tarahumares, and ten months among the Coras and Huichols. At first the natives persistently opposed me; they are very distrustful of the white man, and no wonder, since he has left them little yet to lose. But I managed to make my entry and gradually to gain their confidence and friendship, mainly through my ability to sing their native songs, and by always treating them justly. 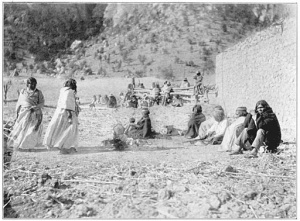 Tarahumare Men and Women
Thus I gained a knowledge of these peoples which could have been procured in no other way. When after five or six months of such sojourns and travel my stock of "civilised" provisions would give out, I subsisted on what I could procure from the Indians. Game is hard to get in Mexico, and one's larder cannot depend on one's gun. As in Australia, my favourite drink was hot water with honey, which, besides being refreshing, gave a relish to a monotonous diet.

All along my route I gathered highly valuable material from the Tarahumares, the Northern and the Southern Tepehuanes, the Coras, the Huichols, and the Tepecanos, all of which tribes except the last named dwell within the Sierra Madre del Norte; also from the Nahuas on the western slopes of the sierra, as well as from those in the States of Jalisco and Mexico; and, finally, from the Tarascos in the State of Michoacan. Of most of these tribes little more than their names were known, and I brought back large collections illustrating their ethnical and anthropological status, besides extensive information in regard to their customs, religion, traditions, and myths. I also completed my collection of vocabularies and aboriginal melodies. On my journey through the Tierra Caliente of the Territory of Tepic, and the States of Jalisco and Michoacan, I also obtained a number of archaeological objects of great historical value and importance.

In 1898 I made my last expedition to Mexico under the same auspices, staying there for four months. On this trip I was accompanied by Dr. Ales Hrdlicka. I revisited the Tarahumares and Huichols in order to supplement the material in hand and to settle doubtful points that had come up in working out my notes. Sixty melodies from these tribes were recorded on the graphophone.

Thus from 1890 to 1898 I spent fully five years in field researches among the natives of northwestern Mexico. The material was collected with a view to shedding light upon the relations between the ancient culture of the valley of Mexico and the Pueblo Indians in the southwest of the United States; to give an insight into the ethnical status of the Mexican Indians now and at the time of the conquest, and to illuminate certain phases in the development of the human race.