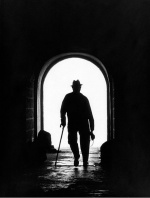 The "Q" in "Q-weapon" is perhaps a reference to the "Q factor" — In physics and engineering the quality factor or Q factor is a dimensionless parameter that describes how under-damped an oscillator or resonator is, or equivalently, characterizes a resonator's bandwidth relative to its center frequency. Crystal oscillator]

"A weapon based on Time [...] With a Time-weapon you could become the most feared person in history."

It seems this gentleman is fictional. although there are some interesting, but tenuous, connections. Agfa-Gevaert is the current owner of the Wardenclyffe Tower facility which housed the Tesla Tower. Lieven Gevaert (1868-1935) was a Belgian industrialist who founded Gevaert & Co. which produced photographic paper, in 1894. The company specialized in "daylight" paper, which relies on the event of exposure of the positive image through daylight, as opposed to development paper which is based on a process of special manipulation with chemicals. (Are photographs "stolen goods"? "Unworldy go-betweens"? Is the Q-Weapon a ... camera? No. It unlocks Time, animating the photograph - See page 1036) Agfa (Actien-Gesellschaft für Anilin-Fabrikation) was founded in 1864 as a manufacturer of dies and stains. In World War II, it became part of IG Farben (prominent in Gravity's Rainbow). The Allies broke up IG Farben after the war and Agfa emerged as an individual company. And, well, there was a Dutch arms dealer named Edouard de Beaumont (1841-1895) who has a rifle named after him. Yes, a stretch... Upon further reflection, I believe "Edouard" may name-connect to Eadweard Muybridge (Edouard was a variant spelling he earlier used) and his photographic experiments with freezing motion/Time. Also, possible connection might be to the 19th C. French photographer Edouard Baldus (1813-1889).