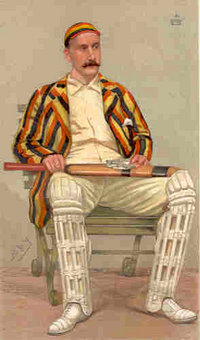 Lord Hawke strode the cricketing world like a colossus for half a century, as a player and administrator, and one who played a major part in the modernisation of the game. He was a keen advocate of overseas tours, a strict disciplinarian, and a determined upholder of the games traditions.

Hawke's life was cricket. He captained Yorkshire for 28 seasons during which time they won eight Championships, and was the county's president for 40 years (despite having been born in Lincolnshire, he fiercely advocated that all players should be born in Yorkshire). He was MCC president from 1914 to 1919, its treasurer and a trustee between 1932 and 1938, and a national selector from 1899 to 1909 and again in 1933. He was no mean batsman either, winning Blues for Cambridge, and leading England in Tests in South Africa.

In a era where professionals were looked down on, Hawke did much to improve their lot. He introduced winter pay - until then they were only paid in the summer months - and a scheme whereby a proportion of benefit income was invested on their behalf. But he was hard on any threat to the spirit of the game. His treatment of a drunken Bobby Peel has gone into the game's folklore - he escorted him off the field and, as Peel himself sarcastically noted: "Lord Hawke put his arm round me and helped me off the ground - and out of first-class cricket. What a gentleman!"

Held in respect and awe while alive, posterity has been less kind to Hawke's memory. Benny Green said that he is remembered "for a succession of monumental blunders which 50 years of apologia from his admirers have done nothing to excuse."

But for his faults, he cared passionately about the game. "Cricket," he once wrote, "is a moral lesson in itself, and the classroom is God's air and sunshine. Foster it, my brothers, protect it from anything that will sully it, so that it will be in favour with all men.'

The following 2 pages link to this file: