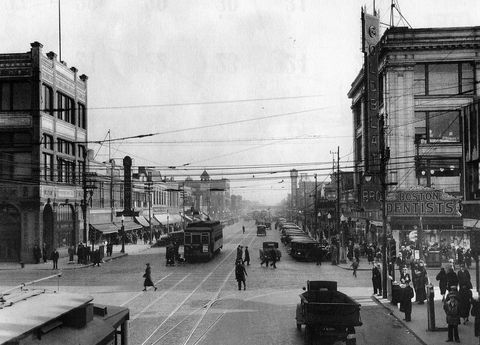 In this 1935 photograph of Chicago's Ashland Avenue, pedestrians crowd the sidewalks, countless automobiles park on the diagonal along the curb, and a 1906 J.G. Brill streetcar pauses in the middle of the street.

The story related above about Ashland being named for the ashes of the Great Chicago Fire is an urban legend. Ashland Avenue, first known as Reuben Street, was already developed before the fire and was considered the height of suburban living on the West Side in the 1860s. In 1864, real estate developer Samuel J. Walker further improved Ashland between Monroe and Harrison, widening and paving the street, building costly homes, and planting trees up and down the sidewalks. Walker was originally from Kentucky and moved to Chicago in 1855. Historians believe either he or Henry Hamilton Honore, another Kentucky native and Chicago developer, renamed the street after the Lexington, Kentucky estate of statesman Henry Clay.[1]

The following 2 pages link to this file: